Earlier on my blog and throughout the PowerPC Centre facebook page, I have talked a bit regarding to a Liquid Cooled 2.7GHz Power Mac G5. I traded Robert (my now best friend, who has done quite a bit for me that I appreciate to the moon and back a billion times over) 2.0GHz G5 for this first 2.7, as I’ve never owned one and would like to see what it was like. Turns out this first one was a pile, and gave me issue after issue with the LCS. So in it’s soon future life, I will be getting some parts off Robert in order to help get this one into a 2.0 or 2.3GHz Air Cooled swap.

So this new one. A few months back I had just received the first 2.7, with UPS messing up the leg and damaging it. Robert happens to live close to a recyclers, so access to Power Mac G5s were easy enough (unlike me where everything has to be shipped into the boonies). The next week he sourced down another 2.7 for me, and this one happened to be in almost perfect shape besides a few missing parts here and there (graphics card, ram, hard drive, side panel). Months came by, and I finally was able to receive it on June 24, months after he had picked it up for me (which I really do appreciate, he is my Mac supplier!).

Standing in the parking lot of the Post Office, I unboxed it in the bed of my truck, and to both of our luck, not one leg was damaged. I brought some parts with me (250GB Hard Drive, 6GB Ram, ATi Radeon 9650 256MB) as I had planned to bring it into the classroom I had to work at but I didn’t get a chance to use it until I got home.

To my luck, again I was amazed. Booted right on up and the temps were low. At idle they were no higher than 165*F, and streaming a 720p YouTube video for 45 minutes raised the temps up to 188*F, which were miles better than the previous G5.

This post is long enough, expect more surprises from Robert and I, we have lots of great ideas and Macs to post about all summer long 🙂 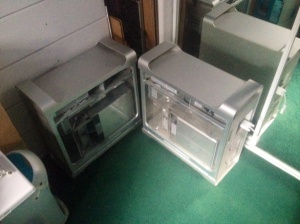