This is a post I wish I made video for, but enjoy the read! This was an entire day of stuff I had to mess with, I wanted to work on the MDD a bit but that’s for tomorrow! Keep some motivation, I was mad about stripping a screw when I could have avoided it, but went to sleep, woke up, and solved the problem 🙂

Later after I posted on here yesterday, my plan was to tear down the G5 entirely and clean out every spec of dust and avoid touching the LCS entirely. As I was removing the processors, I noticed the white rice problem was still here, so that meant I had to do what I really didn’t want to do. The rice was all over my carpet, late at night so I could care less, ended up vacuuming the next day so it all worked out! I stripped a screw entirely so this LCS was toast. However, the other 2.7GHz G5 that is here had a LCS with what we believed was a dying pump. Swapped the pumps and filled it up with coolant, and we were set. The old coolant was yellow (in the picture it’s green, I had to dump some new coolant into the LCS which ended up in the bucket, and ignore the bit that snapped off from the block on the LCS) and smelled horrible. The waterblocks had little black bits stuck to the copper fins, so this may have impeded coolant flow a bit. Lots of crap inside the coolant! 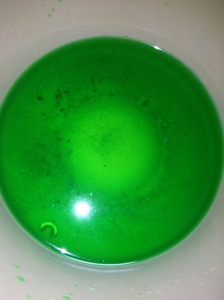 But before this, my plan was to give the 2.7GHz cards a set of air cooled heatsinks to see if the CPUs would stay cool. I successfully got the G5 to boot 3 or so times, then once it was froze it would no longer boot (people have reported success with converting 2.7/2.5 to air cooled, I’ve tried twice to no avail.). However, when I would run Thermal Calibration, I would get the error “CPU0 Verify Check Failed” and this happened with the heatsinks, in two G5 towers. So then I fixed up the LCS and Thermal Calibration passed without an issue.

I’ve ran the G5 for 10 hours now, and not one lockup after passing thermal calibration. Before on the old G5, it could only dream of running this long without an issue. It’s been running great, and I finally own a G5 that is stable for more than a few hours (knock on wood). Temps have been low, and I have not seen anything higher than 189*F even after exporting some lossless video for 20 minutes straight. 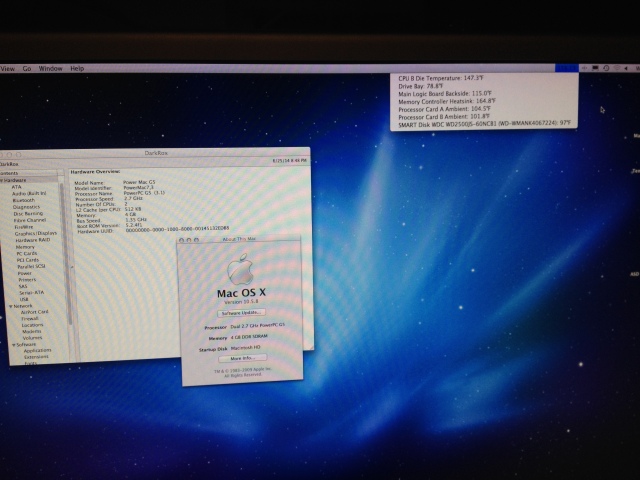