Usually most people buy a machine and keep it for quite some time, but I tend to flip them myself. I enjoy finding a new mac to use and see which one I like the most, and below I’ll explain the macs I liked, since I have owned almost every model of NWR Macs except a Xserve and a iMac G3! Oh – and a PowerBook G3, TiBook, and a colorful iBook. Besides that I’ve owned everything else surprisingly. In Intel land I have tended to flip through machines too, I was previously on a Late 2008 2.4GHz 15″ MBP and now I use a Early 2009 2.66GHz 15″ MBP. I’ve owned many 2006-early08 pre-unibody MBPs as well!

Favorite Mac? I actually really liked my 1.67 PowerBook G4 17″ that was the early 2005 model that used DDR still. I bought it for $40 locally and the screen was full of lines so I busted a nut and spent $90 on a new LCD. The thing was huge and that computer was extremely stable and gave me no issues, however I was hurting for money so off it went to some guy on the East Coast.

Worst Mac? iMac G5 iSight 1.9GHz 17″ for sure. This is the only Mac I ever parted out. I spent $62 on it in January 2013, and after taking the heat gun to the GPU I got another few weeks out of it. After that I pretty much took a few parts that were savable and smashed the display into half. The front casing is actually up on my wall surrounding a clock that shows the temperature as well!

The longest time I’ve owned a Mac? My 400MHz Blue & White. This was my first Mac that I bought for $20 in March of 2011. It was missing a SCSI cable, ram, and the PCI graphics card. Luckily at the time I had a friend (who backstabbed me later that year and ultimately started DyNiForm and proceeded to make these other sites) that hooked me up with the GPU and some ram out of his B&W. I still own this Mac and it’s newest upgrade was a 128MB Radeon 9200 and a 450MHz FastMac G4 however I recently sold those two parts to a friend. 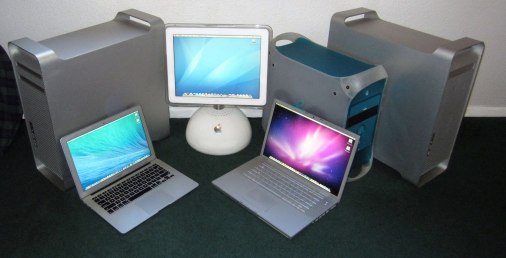 This entry was posted in G3, G4, G5, Hardware, News. Bookmark the permalink.

3 Responses to Flipping through Macs